Towards the end of the 1990s Frank Touhey of Cheltenham, England mentioned to me a Billy Gorlt, who lead a big band in the area of Munich, Germany and who had produced a number of LPs and CDs. Although I had followed big band music since my childhood, I had never come across that name, not even after 1986 when I began producing and presenting beautiful big band sounds, our kind of music on RADIO THURGAU – RTG in Frauenfeld, Switzerland. I therefore sent some recordings of my recent programs on RTG and brief curriculum vitae. A few days later Billy Gorlt telephoned and greeted me with these words:

“My dear Max Wirz, when I read your curriculum vitae, I had to laugh out loud. We have something in common; we were both born on March 9th.

During the ensuing telephone conversation Billy explained that on March 9th, 1945, exactly on his 18th birthday, he was taken POW (prisoner of war) by an American Army unit near Frankfurt, Main. That Lucky Day opened him a life with American Swing Music.

A few weeks after our first telephone contact, my wife Nelly and I drove to Germering to learn more about his life and career.

„After capture we were brought to a camp near Chalon sur Marne in France. A few weeks later, a large stage was built within our view and the same evening an American Band gave a concert. We could hear, but for lack of knowledge of English, we could not understand the announcements. This army band turned out to be an orchestra of about 18 musicians and one girl singer. By questioning our guards we learned that it was the American Band Of The Allied Expeditionary Forces (*2) and that the first piece they played was „Moonlight Serenade“. It was music we had never heard before. It came from another star. Each title differed extremely from the one played before. For the first time in my life I heard a clarinet being played above the alto saxophone. Then they played a melody which dumbfounded me; four trombones took over the function of the rhythm group.

That was unusual on our ears, if not a stroke of genius; It’s title: “Tuxedo Junction”. It became quite clear to me, people who could make such music, could never be our enemies!” >>>>>>>>>>> http://www.bannjongg.com/cgi-bin/sbb/sbb.cgi?&a=show&forum=63&show=38 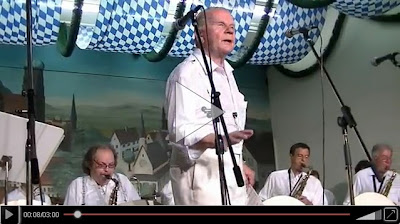